Chicago, the beautiful, warm-hearted metropolis of the Midwest. The third largest city in the United States with a small-town feel. Originally Chicago was a transportation hub for the country sending agricultural products to the east and cargo to the west. It still operates a major transportation hub in the country. Chicago is known for its diversity in all things. The economy is a mix of commercial and manufacturing with over 30 Fortune 500 companies having their headquarters based in the city. 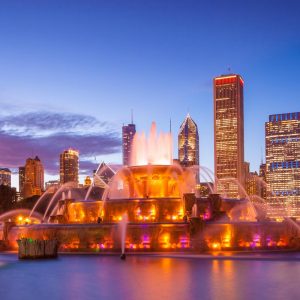 Chicago was a landing point for many immigrants in the 1800's, many coming from Germany, Ireland, and Poland making it a culturally diverse city as well. As Chicago expanded into outlying townships the city grew and became composed of many different neighborhoods largely segmented based on ethnicity. That ethnic tapestry is evident in the many different traditions such as food, religion, cultural celebrations. During the gorgeous summers in Chicago, neighborhoods are known to have their own festivals celebrating the individual nature of their little piece of Chicago’s larger footprint. Art fairs, parades, bar crawls, and music fests dot the landscape on any given weekend in the city neighborhoods.

It doesn’t matter how long someone lived in Chicago. Once they have lived there, they will always feel like a Chicagoan. The city leaves an impression on anyone who lives or visits here. Sometimes a person may just want to feel that warm feeling that Chicago gave them, or a special person in their life by buying some memorabilia, keepsakes, or a gift to help ease their homesickness.

Chicago receives 58 million tourists per year and has been voted the best large city in the U.S. for the last four years in a row by Conde Nast Traveler. People flock to Chicago to visit the most well-known landmarks which largely are located on the lakefront and downtown areas of the city. Many tourists come to stay for a weekend and quickly find that that is not nearly enough time to explore the city. This leads to many return visitors every year.
Some of the most known landmarks in the city include Millennium Park, Navy Pier, the Magnificent Mile, the Art Institute of Chicago, the Museum Campus, Buckingham Fountain, The Willis Tower (forever known as the Sears tower to Chicago residents), Grant Park, and the Lincoln Park Zoo. This listing is just the tip of the iceberg of things to do and see in Chicago. There is theatre, comedy shows (home to Second City), and many concerts such a Lollapalooza each year.
The lakefront of Chicago is a main attraction each summer with many outdoor activities such as rollerblading, bicycling, and beach volleyball to name a few. There is also the opportunity to see the lakefront by Segway if that is more to your liking. You may be looking to just lay a blanket or towel on one of Chicago’s beaches with Oak Street Beach being the most visited beach by tourists. Located off Lake Shore Drive and surrounded by tall buildings it can seem out of place as if it were dropped into the middle of a major metropolitan city.

Chicago’s sports are a main part of the fabric of the city. Two baseball teams divide the city geographically with the most Northsiders rooting for the Cubs who play their games at Wrigley Field and most Southsiders rooting for the White Sox who play their games at Guaranteed Rate Field. Wrigley Field is the second oldest ballpark in the U.S. and has a unique fan following all on its own. Chicago is also home to the Chicago Bulls of the NBA and the Chicago Blackhawks of the NHL.